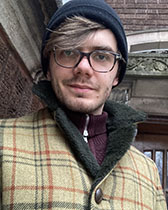 I work on the relationship between Hegel’s aesthetics and his philosophy of right. Specifically, my dissertation argues that Hegel views social life as essentially limited in its ability to realize freedom, because it depends on us developing a habitual, and hence unreflective, attitude towards social norms—they become “second nature”. Art suspends this habitual attitude by making us reflect on (first and second) nature as having a meaning that spiritual beings such as ourselves can reconstruct and change. The project is an attempt to clarify the role of art in thinking about freedom. I argue that emancipatory thinking cannot focus solely on social and political questions. But instead of seeing art as either an escape from politics, or as itself essentially political, I argue that Hegel offers a plausible delimitation of the questions that should be solved by social and political institutions and those that art (and the rest of “absolute spirit”) can better address.

In addition to this project, I have published work on ideology critique and continue to be interested in systematic issues of contemporary critical theory. I also explore the philosophy of literature on occasion, with a special interest in Michel de Montaigne and Thomas Mann.

Before coming to Northwestern, I studied literature and philosophy at the University of Roskilde, in my native Denmark, as well as philosophy at Columbia University, the École normale supérieure, and the École des hautes études en sciences sociales. I am currently a visiting researcher at the Goethe University, Frankfurt am Main.

To cope with the stress of graduate school, I go biking and listen to music.