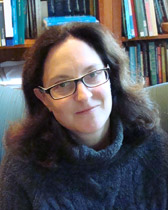 I am not hiring a research assistant or an administrative assistant. Any email advertising or offering that position is fraudulent. (Posted 1/12/22)

My research focuses on Kant and his philosophical context, broadly understood: both his eighteenth-century contemporaries, and post-Kantian, nineteenth-century philosophy. I am interested in practically every aspect of Kant’s philosophy, but my research has concentrated most on the Critique of Judgment, including work on Kant’s aesthetics, philosophy of biology, and questions concerning the possibility of empirical knowledge. Recently, I have been working on essays, which may ultimately form a book, concerning the aspirational character of reason on Kant’s view: on the ideas of reason as presenting goals for scientific explanation, orienting the agent to moral life as a never-to-be-completed task, or felt as precarious self-transcendence in the aesthetic experience of the sublime.  I have also recently completed a book on Johann Gottfried Herder’s aesthetic theory and at present am working on a collection of essays treating various topics in eighteenth-century Scottish aesthetics.

Interview, Naturalist Herder and Arty Kant, with 3am Magazine.