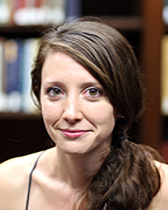 I work in ancient Greek philosophy. My work is at the intersection of ethics, moral psychology, and epistemology in the works of Plato and Aristotle. I am interested in the connection between affective states and intellectual capabilities, species of human motivation, and the extent to which ancient moral psychological models are shaped by the recognition that we are social beings by nature.

I have an ongoing interest in the history of medicine, and I have written on Galen’s philosophy of mind and teleology. I also have research interests on women, gender, foreigners, and other marginalized people in ancient medicine and philosophy.